In a single equation, physicists have claimed to have found the unfathomable equivalency of mass and energy, while chemists ever so often bring up the Law of Conservation of Mass when attempting to explain the unexplainable, and biologists rationally express that your skin is made of sand which will one day decompose back into Earth. Physics, chemistry, and biology are all proclaiming the same ideas, yet they’re all left incomplete when viewed solely. When combining the philosophical idea of existence with these branches of science, could one say that we have found an answer to the question of existing eternally?

Before exploring the idea of existing forever, it is vital to distinguish the difference between both existing and living. When the words existing eternally are mentioned, you must be thinking about possibly being able to humanly be living forever, similar to the idea presented in the book, Tuck Everlasting. In fictional terms, this can be true, but in the field of philosophy, living has quite a different meaning. According to the Cambridge Dictionary, existing is defined as “to be; have the ability to be known, recognized, or understood” (Cambridge Dictionary). When looking at this definition, existing doesn’t mean to be alive, only to be present and comprehensible. Whether it be a water bottle or a human, both exist. Conversely, the biotic components of the world such as living organisms are the only group that could be placed into the category of living.

Now since we have established a stern difference between living and existing, view this question from the perspective of the dictionary definition of existence. Singlehandedly, the 2 words, existing infinitely, have kept science and philosophy in a chokehold for centuries, including the genius, Albert Einstein. He has fostered the most powerful equation to ever be created, E = mc^2, and has explained it in remarkably simple words. Einstein has stated, “Furthermore, the equation E is equal to m c-squared, in which energy is put equal to mass, multiplied by the square of the velocity of light, showed that very small amounts of mass may be converted into a very large amount of energy and vice versa. The mass and energy were in fact equivalent, according to the formula mentioned before.” (Einstein Explains the Equivalence of Energy and Matter). This explanation can lead us to conclude that energy and mass are both different forms of the same thing, energy can be converted into mass and mass into energy. This physics equation can be followed through by the Law of Conservation of Mass adopted in chemistry. This law explains that the mass that you had begun with has to be parallel to the mass you end with, so not only are mass and energy interchangeable, but they are also indestructible. We, humans, are made of mass and energy. The energy in our human body is in the form of electrical impulses/signals and chemical reactions, which can be gained or lost from our body by experiencing chemical processes, getting rid of human waste in the body, and releasing heat. However, even though energy can be lost or gained in our body, the energy cycles endlessly between our body and the universe. Same with mass, which is simply the ratio of one’s weight and height. To add on, the concept of human decomposition in biology claims that human skin is made of tiny grains of sand that must also decompose back into the Earth as dirt, etc. Religion and secular science have both ignited the idea of humans being formed of dust. The Big Bang theory implements the idea of Earth and all life in it being created from stardust, while in religious terms, the Bible and Quran say that God created humans from clay and mud. This concept could be applied when taking a look at the process of burying an organism, its body’s mass, energy, and physical form return back to the universe in one way or another. With all this explained, could one conclude that although not in the form of a human body, one could still exist eternally as another form in the universe?

When connecting the idea of existing forever to the definition of existing, they overlap on the grounds of how much non-living factors in the world exist, compared to living factors. Both a human and, for example, a rock can be broken down to end up with a mass of atoms. Atoms are present in both of theses things because atoms aren’t alive or dead, they simply exist in all tangible things. The only difference between the atoms in living and non-living things is the arrangement of atoms in living organisms that allows cells to reproduce and produce movement etc., which a rock cannot do. Yet, when disintegrating both items so intricately to where you end up with a clump of atoms and without giving regard to its arrangement, you could see that we, humans, exist as much as a rock exists. Both rocks and humans are created from the basic building block of an atom, so when talking about existing, not living, but existing, could we humans be said to exist equally to any other tangible item in the realm of existence?

In the matter of such, we have formed the idea of existing equal to any other concrete item in the universe consisting of atoms, so when discussing on the basis of human rights, both morally and logically we humans are all considered equal in the eyes of both science and philosophy. Disregarding living organisms’ ability to move, talk, and basically communicate with the environment, when viewing this idea from the perspective of mere existence, this can display that everything in the realm of existence should be treated equally as they all begin and end as evermore a part of the universe. 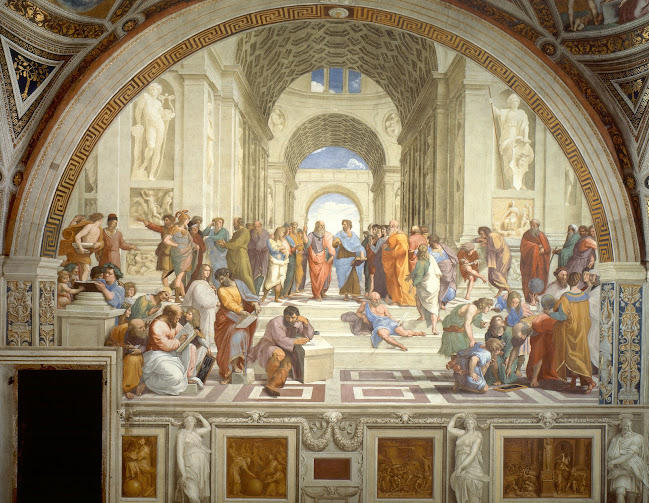 Painting: 'The School of Athens' by Raphael Influential figures in this painting: Plato Plato's symbolic gesture of pointing up to the sky resembles his idea of "Theory of Forms" in which he explains that our world ,  the physical realm, is not real , but rather so the spiritual realm  is the truth. Spirituality is where our ultimate reality lies, not in this materialistic world. Aristotle Aristotle places his hand forwards, facing it towards the ground, to symbolize his theory of empiricism. This theory explains that all knowledge comes from sensory experience—smell, touch, sight, taste, and vision. Although Plato and Aristotle are right next to each other, their theories somewhat differ as Aristotle proposed a very humanistic approach to the concept of epistemology—the theory of knowledge. Socrates He is considered the father of philosophy and has taught many including both Plato and Aristotle. Socrates would enlighten people by questioning them endless
Read more

By Soha Sunesara Thursday, February 17, 2022
You wake up, to a beautiful sunrise with the sun’s warmth blanketing your skin, as your face becomes warmer, lovelier, sweeter, like Shakespeare’s summer day in Sonnet 18. You feel nothing, but the absolute present, until your dreamy state is replaced with your everyday responsibilities, hazy memories, and core beliefs that define who you are. For a beautiful second, you were truly free, but then you gathered yourself and shifted into the mindset of who you believe yourself to be in this world, your Ego. We as humans use our perception as a somewhat survival tactic in this world. We use our thoughts and experiences to shape who we are and create certain labels that define us. I can call myself a Muslim, a writer, an Indian, a brunette, a dreamer, a sister, daughter, friend, etc. These labels make it easier for my mind to understand my sensations, perceptions, and thoughts put into a more comprehendible way to create my place in this world. This can be related to the Bundle theory creat
Read more